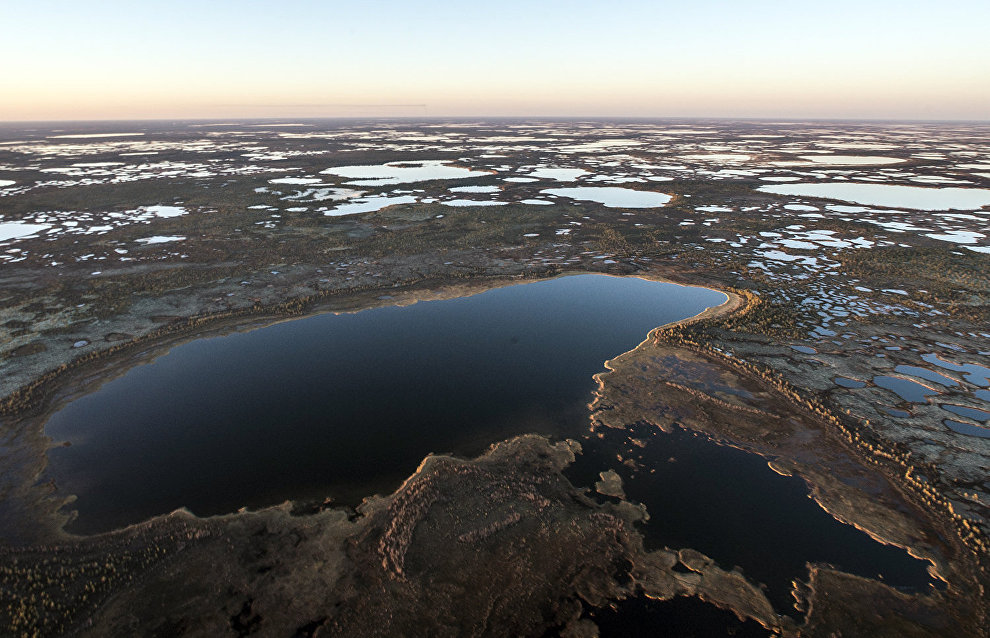 An analysis of data on the quality of water and concentrations of a range of elements in small lakes in the Arctic has been presented by the Vernadsky Institute of Geochemistry and Analytical Chemistry of the Russian Academy of Sciences and University оf Tyumen (UTMN). The lakes were on the Kola Peninsula (European Russia), the Yamal-Nenets Autonomous Area (west Siberia), and the Norilsk Region (east Siberia).

According to scientists, aquatic systems are collectors of environmental pollutants and they reflect changes in the geochemical cycles of elements. Small lakes located far from direct pollution sources are accumulators of elements that are dispersed in the environment and indicators of air diffused metals.

The researchers generalized the results of the chemical tests of water from 99 small lakes measuring between 0.4 and 20 square kilometers and located in the tundra and in the forest tundra. Of these 35 were in the Kola Peninsula, 52 in the Yamal-Nenets Autonomous Area, and 12 in the Norilsk Region in the relative vicinity of the industrial center. Water samples were taken during the water cooling period in the fall, when at +4°С chemical composition indicators level out in terms of depth.

The tests showed that the water chemistry in the lakes has both general and specific characteristics related to the geochemical structure of the regions in question and different levels of human impact. The highest concentration of dissolved solids was found in water from the Norilsk Region as a consequence of the lakes' proximity to a large industrial zone. Water samples from the Yamal-Nenets and Kola regions vary greatly in terms of dissolved solids and pH values. There are over-acidified lakes with low pH values, highly transparent water and high sulfate content. Swampy bodies of water have water of high color.

To assess anthropogenic impact, a variable has been calculated to gauge the enrichment of water with uncharacteristic components, such as various metals and other heavy elements with a toxic effect that can be classified as pollutants. The highest values were obtained for the Norilsk Region, where waters contain much rhenium, nickel, vanadium, copper, cadmium, molybdenum and antimony. Waters in the Yamal-Nenets Autonomous Area are enriched with lead, vanadium, arsenic, antimony and particularly molybdenum. In the Kola Peninsula, the highest values were recorded for nickel, cadmium, arsenic, antimony and selenium, elements that reflect the region's industrial impact.

Although the toxic element levels are within the reference ranges, the studies point to the existence of a global trend for more elements in Arctic waters that eventually get involved in biogeochemical cycles.

"The indicators must constantly be controlled, because these chemical substances can accumulate in living organisms and have a toxic effect," Director of the UTMN Institute of Chemistry Tatyana Kremlyova said.

Although this process can be a consequence of changes in the natural migration of elements or that of the geochemical specifics of their aggregation, researchers believe that the main reason behind the increased content of these elements is air pollution caused by long-distance diffusion of smoke emissions from copper and nickel smelters, mining-and-metallurgical integrated works, oil and gas fields, and other industrial businesses. It must be noted that all the regions under study are major mineral-producing centers.

Over the past century, the anthropogenic introduction of elements into the environment has increased dramatically all over the world. The advanced countries of Europe and North America have reduced the emissions of metals during the last few decades. But the environment in many regions located far from industrial centers has accumulated certain amounts of metals and other heavy elements. For example, increased concentrations of some dangerous substances, such as quicksilver, cadmium and lead, have been detected in the snow cover in Greenland and the High Arctic.

"The Arctic regions are particularly vulnerable to an increased content of metals in the environment. This can be explained by a low level of mass and energy exchanges in the cold latitudes. The food chains are short here and endemic organisms are highly sensitive to unfavorable impact," Dr. Kremlyova summed up.

The study was carried out with support from the Russian Foundation for Basic Research, Grant 18-05-60012. The results were published in the article "Geochemical Regularities of the Diffusion of Elements in Arctic Lakes" in the journal, Geochemistry.