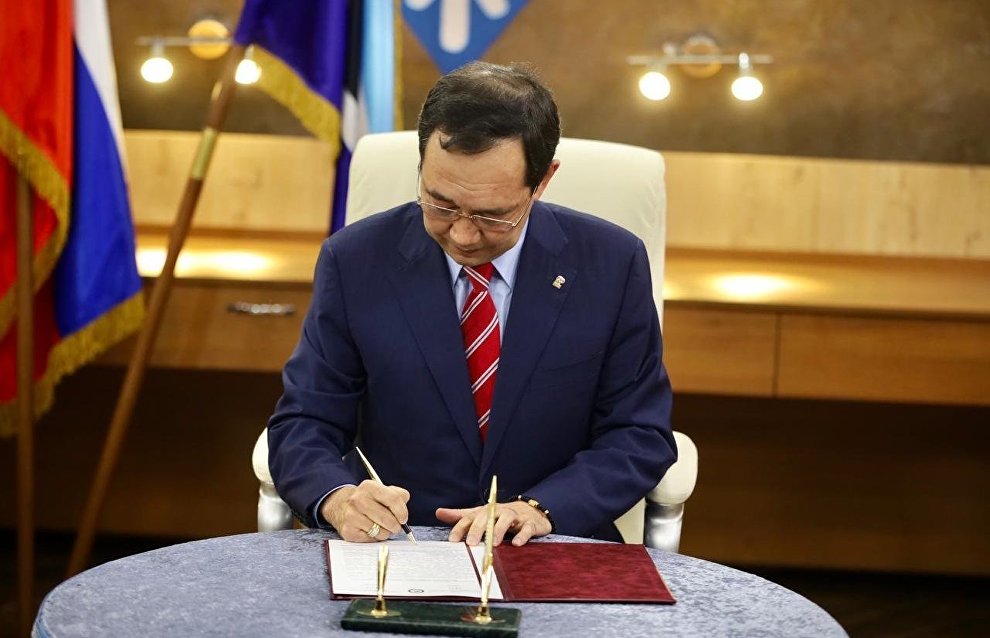 © The Press Center of the Republic of Sakha (Yakutia) in Moscow

The signing of the Strategy for the Socioeconomic Development of the Arctic Zone of the Republic of Sakha (Yakutia) until 2035 in five areas — social, industrial, transit, environmental and innovation — has taken place in the village of Olenyok, Olenyoksky District. The ceremony was attended by regional head Aisen Nikolayev, members of the republic's Cabinet, people's deputies and representatives of public organizations.

The strategic planning document should improve the quality of life of Yakutia residents living in the Arctic regions. It includes modernizing airports, developing small aircraft, resuming of regular navigation along the Northern Sea Route, building roads, providing the population with accessible internet, promoting commercial development based on the principles of social responsibility, commissioning social facilities and other infrastructure, preserving the traditional lifestyle of the Northern peoples, their culture and traditions, and developing education, medicine and Arctic tourism.

"To me, the main criteria for the implementation of the strategy of socioeconomic development of the republic's Arctic zone will be the improvement of the quality of life of the people who live here," Arsen Nikolayev said.

The document divides the republic's Arctic areas using the catchment-based approach into the Anabar, Lena, Yana, Indigirka and Kolyma groups of uluses (districts). Each of the five groups has its own development priorities. The main points of growth will be district centers, with a focus on villages and towns with an expressed economic specialty, such as Verkhoyansk, Ust-Kuiga, Yuryung-Khaya, Kazachye and Kyusyur.

In the Anabar basin, plans call for a new stage of industrial development, that is, increasing the production capacities of the Verkhne-Munskoye diamond deposit, developing the Tomtorskoye rare metal deposit, and conducting a geological survey in the Lena-Anabarskoye oil bearing area and the Zapadno-Anabarskoye licensed site.
The Lena group will create a base for fundamental research on the Russian Arctic zone, which will become a foothold for building military infrastructure and developing the Northern Sea Route at the Tiksi seaport base. The mining of diamonds and stream gold will continue, and there are plans to conduct a geological survey to detect hydrocarbon deposits.

The development of the Yana group is related to the historical territorial and production complex for mining mineral ore deposits. In the Verkhoyansk and Eveno-Batyntaisky districts, a local brand of marble meat will be developed by breeding Yakut cows and Yana horses. In the Ust-Yansky district, plans call for the commercial breeding of reindeer, as well as fishery and fish processing projects.

In the Indigirka group, which has vast reindeer pastures, the priority development area will be reindeer breeding. There are also plans to develop fishing, as well as streamline mammoth ivory and bone mining and processing.

The development prospects of the Kolyma basin concern the revival of the Northern Sea Route. Increasing the production of coal in the Zyryansky coal mine and developing the necessary export infrastructure could boost the cargo flow on the Northern Sea Route by 1-1.5 million metric tons. The development of the Baimskaya ore zone in the Chukotka Autonomous Area will transform the Zelenomyssky river port into a leading transit hub of the Eastern Arctic.

Leading federal and regional researchers and government bodies have been working on the socioeconomic development strategy for Yakutia's Arctic zone since 2018 at the request of the regional head. Representatives of public organizations and the region's residents were able to make proposals during public discussions.

The document will be the foundation of the integrated state policy in Yakutia's Arctic zone: 13 municipal districts that cover over one half of the entire republic.