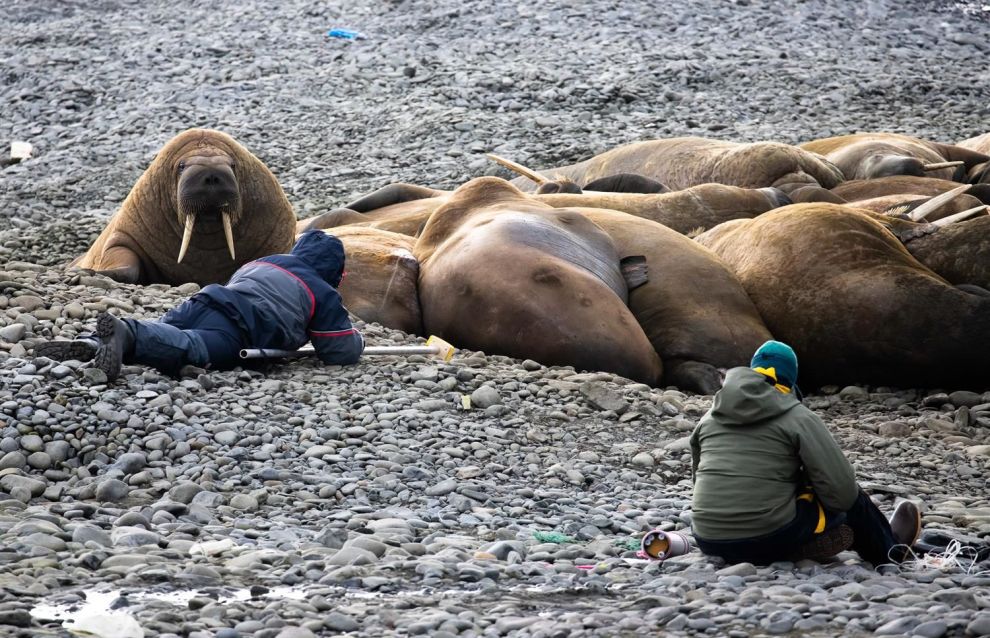 During the expedition, the researchers worked on the protected archipelagoes of Franz Josef Land (the park’s northern cluster) and Novaya Zemlya (the park’s southern cluster). Their goal was to continue studying marine mammals in the Russian Arctic, determine their current state and introduce new methods of studying animals in the protected area).

“To analyze the state of a species, we inspected 26 islands of the Franz Josef Land Archipelago and the Oran Islands of Novaya Zemlya Archipelago. While preparing for the expedition, our group was told that large walrus rookeries could be located in 20 spots. We did not confirm all the locations. Thus, we didn’t find walruses on Cape Ostantsovyi of Heiss Island, although they used to be there. We didn’t find them on Cape Frankfurt of Hall Island or on Adelaide Island. But we found a new rookery on Jackson Island, where our colleagues set up a camera trap to monitor the animals,” said Svetlana Artemyeva, leading engineer of the Severtsov Institute of Ecology and Evolution at the Russian Academy of Sciences (RAS).

Drones were used to count the animals. Researchers praised the Geoskan device, which made it possible to create 3D models of the islands of Franz Josef Land Archipelago. They also used small drones to monitor the population of walruses and track polar bears.

In addition, researchers conducted the first hydro-biological studies of the walruses’ diet in rookeries at Russian Arctic National Park. To make the observations more reliable, they used special cameras to monitor the underwater work.

During the expedition, the researchers also used satellite tagging methods. On Franz Josef Land, they put satellite tags on walruses on Eva-Liv, Jackson, Northbrook and Dead Seal islands. Biologists managed to study six polar bears on Novaya Zemlya. This time, in addition to the traditional blood tests for genetic studies and viral diseases, they checked the bears’ blood for heavy metals and other pollutants.

“This is the third time we are working on Cape Zhelaniya in the park’s southern sector. It will be interesting to compare our results with the previous ones. The animals look to be in better shape than in the past few years. Although the bears had a scant summer diet that mostly consisted of grass and seaweed, all the bears we encountered felt well,” said Ilya Mordvintsev (Ph.D. in Biology), a senior research associate of the RAS Severtsov Institute of Ecology and Evolution.

The researchers noted that all the methods they used to study animals during the expedition were minimally invasive and did not subject the animals to stress.

“Scientists track the behavior of walruses and polar bears by putting satellite tags on them. Specialists believe all the animals remained in their usual home areas after these studies. We are pleased that the animals do not experience stress and do not move around the protected area as a result of human interference,” said Alexander Kirillov, director of Russian Arctic National Park.

During the expedition, the researchers installed 10 motion-sensor cameras to monitor Atlantic walrus rookeries.

“By combining animal counts using satellite tracking and drones with the study of their diet, the scientists may reveal patterns in the distribution of different species in the protected area. This approach is very topical: the less we bother nature, the more we understand the natural processes taking place there,” said Ivan Mizin (Ph.D. in Biology), the park’s deputy director for research.

The expedition was held at the initiative of the Rosneft Arctic Research Center in cooperation with the RAS Severtsov Institute of Ecology and Evolution, the Russian Academy of Sciences and Moscow State University’s Marine Research Center.