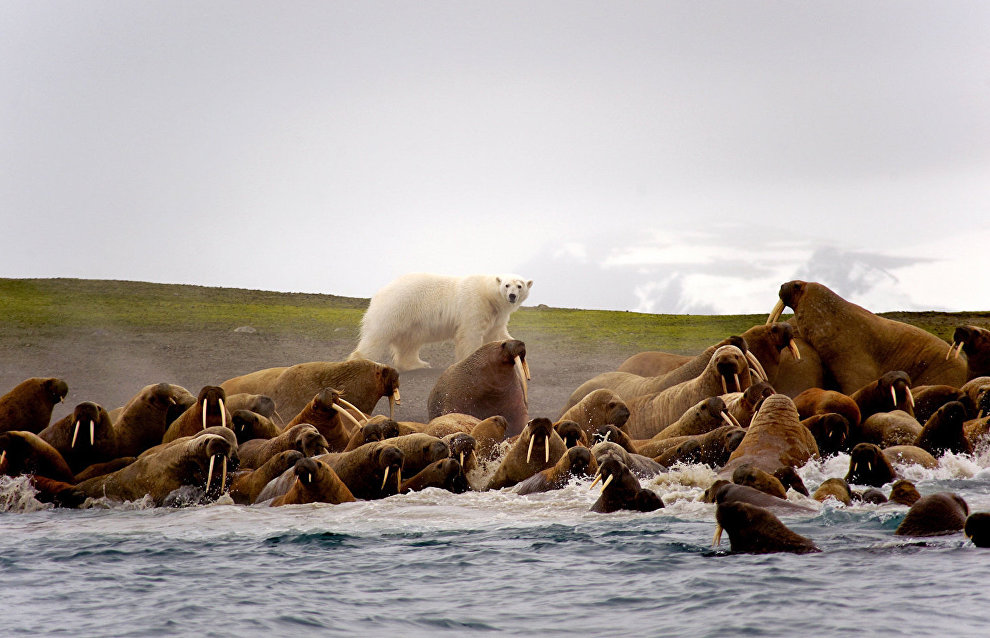 Scientists: Polar bears and walruses can be friends

Scientists have been observing polar bears on the Taimyr Peninsula for the past few years, and they have noted changes in their customary behavior, according to Pavel Kochkaryov, Director of Central Siberian Reserve in the Krasnoyarsk Territory.

For example, polar bears have started entering walrus breeding grounds on the Laptev Sea and Kara Sea coasts. Walruses no longer fear these predators who now often mingle with them.

“The walruses appear to be fine. On our last visit, we sighted five bears in the breeding ground. One of them was sitting, surrounded by walruses. I even had the impression that a walrus was lying on the bear’s flank. We are witnessing a more pronounced symbiosis involving ‘shepherd’ bears and ‘sheep’ walruses. We were really surprised to see five bears guarding a large breeding ground with about 400 walruses,” Kochkaryov noted. The predators eat dead walruses and therefore act like real caretakers of the Arctic.

In turn, Ivan Mizin, Deputy Director for Research at Russian Arctic National Park, added that polar bears often have trouble fighting huge walruses. In many cases, bears find it easier to wait until these animals die of natural causes.

“In principle, this is a normal survival strategy because there are many dead animals at large breeding grounds with several thousand walruses, but a bear will always attack a smaller walrus whenever possible,” he added.

Researchers note that they are still unable to answer many questions regarding polar bears. There are plans to monitor polar bear populations all over the Arctic, and a strategy for saving polar bears is also being finalized.