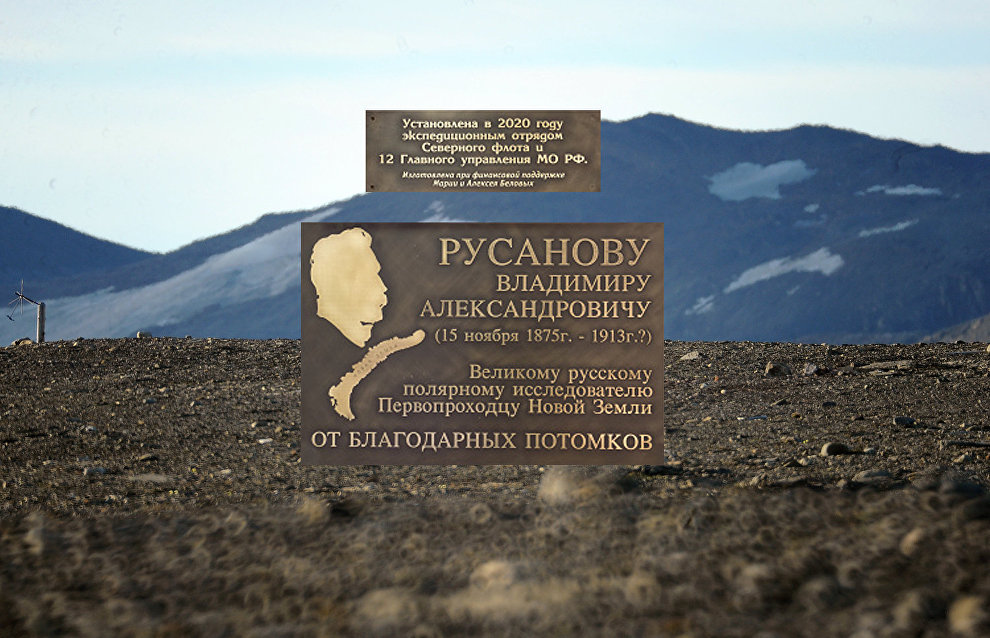 A memorial plaque in honor of Vladimir Rusanov, an Arctic explorer, was installed on the coast of Yuzhny Island in the Matochkin Strait of the Novaya Zemlya archipelago. This year marks the polar researcher's 145th birthday. The plaque was funded by benefactors Maria and Alexei Belov.

The latest Arctic expedition to the islands of the Novaya Zemlya Archipelago includes representatives of the Northern Fleet, the 12th Main Directorate of the Russian Defense Ministry, the Russian Geographical Society (RGS), Russian Arctic National Park and research institutes.

One of the expedition units will go around Severny Island of the archipelago, retracing the route of Vladimir Rusanov, who was the first Russian researcher to navigate that area in 1910 on the Dmitry Solunsky motorized sailing vessel.

"We would like to recreate the route of Rusanov and, hopefully, find its traces. Vladimir Rusanov was an outstanding Russian scientist who did a lot for Arctic development. Any new discovery linked with his name will allow us to learn more about the events of those years," said Sergei Churkin, the scientific head of the expedition. "Symbolically, specialists from the Central Testing Ground of the Russian Federation will take part in the expedition. The Motherland entrusted them with continuing the scientific traditions laid down by Rusanov on the archipelago," he added.

After the unveiling ceremony, the researchers sailed to the Melky Bay, at the coast of which they inspected the condition of the wintering hut and the grave of Avgust Tsivolka, who served as a warrant officer of the navigator corps and took part in three expeditions to Novaya Zemlya. The researchers found household items and fragments of a wooden boat with nailed initials and swastika.

The expedition then moved to the Krestovaya Bay to wait for a storm to pass and plans in several days to reach Cape Zhelaniya, where it will install a memorial sign in honor of the 175th anniversary of the Russian Geographical Society.