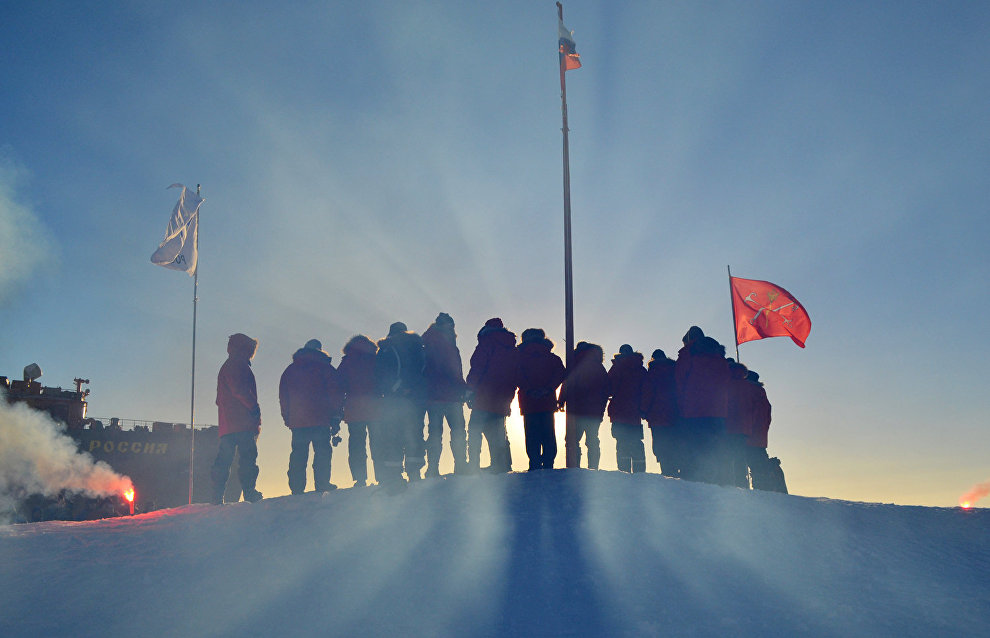 Summer of research. Several expeditions in the Arctic at once

A joint UNESCO and Moscow Lomonosov State University (MSU) project is a floating university; the research vessel (RV) Akademik Nikolai Strakhov, entered the Barents Sea where about 20 students from MSU and other Russian universities will study the potential for the region's oil and gas reserves with support from the Ministry of Education and Science.

The main goal of the expedition is to study the glacial deposits in the northeastern part of the Barents Sea, determine any abnormal concentrations of fluids or organic matter in seabed deposits, study the geomorphological structure of the seabed, develop geological, geophysical and geochemical methods of searching for hydrocarbon deposits on the continental shelf and training young marine specialists for developing the Arctic. Every day, students listen to lectures on various subjects — marine geology, geophysics and geochemistry, to name a few.

A Russian Academy of Sciences (RAS) Shirshov Institute of Oceanology expedition has left to study the Arctic environment and climate within the limits of the economic zones of Norway and Russia on the RV Akademik Mstislav Keldysh.

Specialists will study the degradation of long-standing permafrost and the melting of glaciers. They also plan to receive data on the distribution and structure of dissipated sedimentary substances. These are fine solid particles that exist in the atmosphere, water, snow and ice. Researchers will study biogeochemical processes in the water column and bottom sediment to assess the consequences of environmental and climate changes.

Members of the expedition plan to establish a Yakut outstation on the island to be used as a rescue and permanent research base. The traditional Yakut hitching pole called serghe will also be installed on one of Russia's northernmost territories. Research is also of interest: the adventure travelers hope to get information on the change in climate and nature on a perfect section of the ground that nobody has visited in almost 70 years. They will check on the memorial places devoted to Arctic trailblazers and will repair them, if needed. They also hope to find new traces of historical pioneers.

Expeditions to the archipelagos Franz Josef Land and Novaya Zemlya are taking place aboard the RV Mechanic Yartsev under the aegis of the Russian Geographical Society (RGS). The expedition team from the Russian Arctic National Park and the RAS Institute of Geography will unload building materials for the restoration of the aircraft hangar at the Tikhaya Bay and will take a survey of sea mammals. In addition, researchers plan to take samples of Arctic soils to check pollution levels from oil products, and record cartographic data on Heiss Island in the Franz Josef Land archipelago as part of the second stage of the Clean Arctic research project by Russian Arctic National Park and Rosneft.

The expedition will also include a representative from the Museum and Exhibition Centre for the Technical and Technological Development of the Arctic Nikolai Frizin. He will supervise the creation of an exposition for the open-air Arctic Development Museum.

The expedition will be followed by two films: a film crew from the national park will document the rough life in Specially Protected Natural Areas (SPNA); videographer Maxim Pervakov will stay on Cape Zhelaniye for two months to work on a film about the master of the Arctic — the polar bear.

The big Norilsk expedition sailed from Taimyr. "This is a unique event. The last combined expedition took place over 20 years ago and was largely limited to Arctic waters. No combined studies have been conducted in subaerial permafrost zones since Soviet times," said Head of the Laboratory of Environmental and Economic Modelling of Technogenic Systems at the Trofimuk Institute of Petroleum Geology and Geophysics, Siberian Branch of the Russian Academy of Sciences (IPGG SB RAS) Nikolai Yurkevich, who is in charge of the team.

Over 30 specialists from 14 RAS Siberian Branch institutes in Krasnoyarsk, Barnaul, Novosibirsk, Tomsk, Yakutsk and Norilsk will be divided into groups based on their competencies: hydro biologists, soil scientists, experts on subaerial environmental systems, bottom sediment, bio- and zoological diversity and the permafrost rock mass. "The most important thing is a multidisciplinary approach," Yurkevich said.

The field part of the expedition will run through August. During the time left the researchers will study the surroundings of Norilsk, local river basins and Lake Pyasino.

In 2014, experts noted a change in behaviour of the reindeer: they remained in their traditional calving places (summer pastures) for two-thirds less time than in the 1960s. Now they go to the northern extremity of the Byrranga Mountains and then turn back. In the past few decades the herds began to leave the tundra in mid-August, but this year they left even earlier. Scientists believe they will return to Evenkia for wintering.

Researchers also noted that the reindeer were traveling less. Migration distances have decreased from 1,100 km to 700 km over the past five years. The population numbers have declined as well: from a million reindeer in Soviet years to about 430,000-450,000 now.

Climate change is one of the reasons for all this research — average temperatures in the north are rising twice as fast as in the rest of the world. Some geo-botanical studies show that lichen coverage has also decreased from 70 percent to 17 percent and even to 7 percent in some places.

Scientists mention the death of young reindeer when crossing northern rivers as further evidence of climate change. Previously reindeer crossed the wider parts of rivers on ice whereas now they have to swim, which is physically difficult for them.

To confirm or reject this hypothesis SFU specialists have sent two groups of researchers to the Kheta and Khatanga rivers. They will determine the gender and age of the local reindeer and count this year's offspring. This will allow researchers to make a numerical forecast of their population.