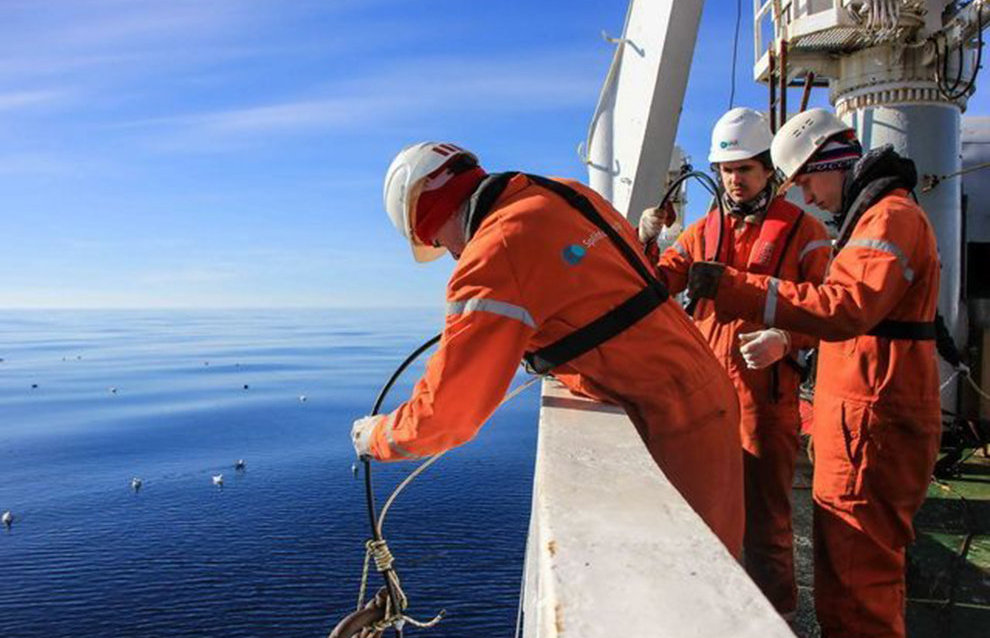 The Akademik Nikolai Strakhov research vessel entered the Barents Sea between Franz Josef Land and Novaya Zemlya, where geologists from Moscow State University will study the prospects for oil and gas reserves in the area.

As soon as the ship crossed into the study area, the test equipment, a sparker and a seismic streamer, were lowered into the water to collect background sediment samples. The geological team took samples using a gravity pipe.

"This is not an easy process. When lifting the pipe aboard, first you need to secure it with tag lines so the pipe doesn't come loose during rolling, and bring it to the cradle using windlasses, pull out the liners with core samples, rinse the pipe, replace the liners with new ones and prepare it for a new run. The weight of the pipe with weights and soil is over 700 kilograms. The collected core samples are submitted for detailed research in the laboratory of organic geochemistry, microbiology, sedimentology, hydrogeology and engineering geology. Students document the core, measure hydrogeological and engineering parameters, hydrocarbon and non-hydrocarbon gases, and carry out sampling for further detailed studies at the university's laboratories," the press service of Moscow State University said.

According to Grigory Akhmanov, a series of geophysical surveys was carried out at the first research site, and on July 28, based on the results of primary information, sites for detailed geological sampling will be selected. Grigory Akhmanov is head of the expedition, associate professor of the Faculty of Geology at Moscow State University and head of the UNESCO-MSU Floating University.

In addition, we are preparing and adjusting the equipment on board: the geological team assembled the shock pipe for sampling bottom sediment at the stern of the vessel, a photo installation for core samples was fixed in the hydrogeology lab, and the engineering geology and sedimentology labs. The geophysicists on the seismic acoustics team assembled a sparker (a source of acoustic vibration), and their colleagues on the analyzing team studied the programs for processing the data of a multibeam echosounder. In the geochemistry laboratory, the scientists installed a chromatograph and mastered geochemical research methods. In addition, every day, in the morning and in the evening, the scientists give lectures on oceanology, geocryology, geophysics, geochemistry, marine seismic exploration. and on the geology of the Barents Sea.

"Aboard the research vessel, students and teaching staff from the Geological Faculty of Moscow State University are engaged in expeditionary work under the TTR-19 Teaching-Through-Research project on the Arctic shelf. The expedition aims to study glacial deposits within the northeastern part of the Barents Sea, determine abnormal concentrations of fluids and organic matter in seafloor sediment, study the geomorphological structure of the seabed, develop geological, geophysical and geochemical methods for searching for hydrocarbon deposits on the shelf and train young specialists in marine areas for the development of the Arctic," the message reads.

The Akademik Nikolai Strakhov research vessel left the port of Kaliningrad on July 18, 2020. While passing through the Baltic, North and Norwegian seas to the research area, the participants of the voyage experienced the inconstancy of the Arctic summer.

"The scientists have seen complete calm and milky fog in the Barents Sea and have felt the unpleasant rolling of the Norwegian Sea. The temperature gradually decreased as the ship moved north. The ship was followed by dolphins and whales, as well as by seals, fur seals and of course, our constant companions, seagulls in the Barents Sea. By the beginning of the work, we enjoyed calm sunny weather, the sea was calm, the air temperature was +10o C, and the water temperature +5o C," the organizers of the study said.