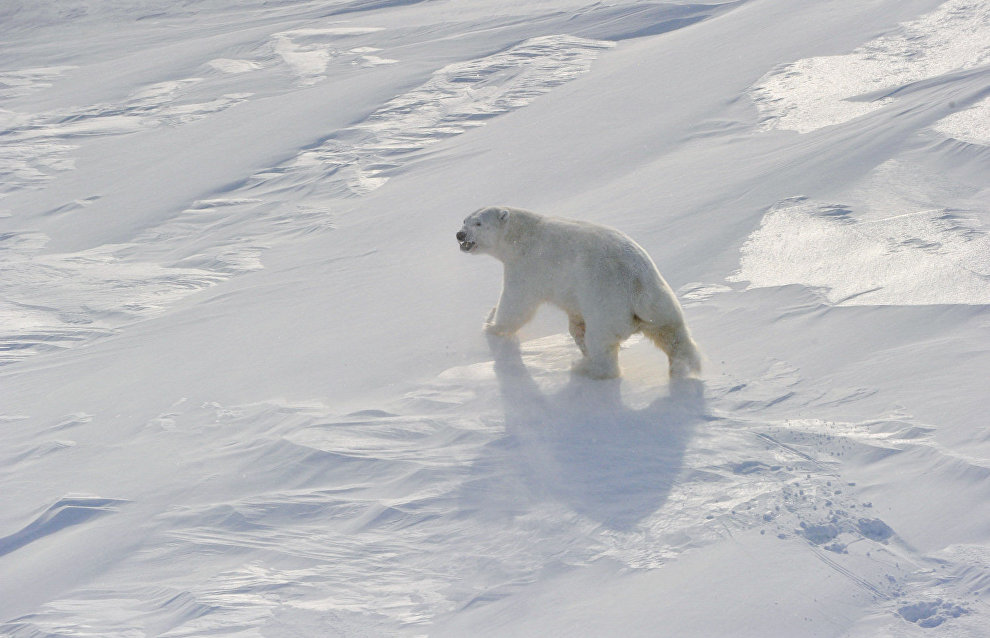 How and why scientists will count polar bears, masters of the Arctic

The current state of the polar bear population and its distribution in the Arctic is an issue that has been of concern to the specialists studying this region for decades. The polar bear is the largest representative of the family Ursidae and the order Carnivora. This bear is protected by the Russian and International Red Data Book. It is the top of the food chain in its habitat and an important indicator of the entire Arctic ecosystem.

Today the world, especially the circumpolar countries, Canada, the US, Norway and Denmark, is drawn to polar bears. In the 1970s, Russia counted these predators every year, but in recent decades only expert estimates of the state of the polar bear population have been published based mostly on lair count: how many lairs, where they are and how many cubs. However, it is impossible to see the full picture with this method.

"We have to know how many bears there are in different parts of the Arctic to see which processes the population is undergoing, how far the bears migrate, the structure of various groups, and the threats the bears are exposed to considering human activity and environmental processes. We need to create this kind of comprehensive monitoring," noted academician Vyacheslav Rozhnov, director of the Severtsov Institute of Ecology and Evolution at the Russian Academy of Sciences.

The first footprints in the snow

On March 25, 2020, the Federal Supervisory Natural Resources Management Service (Rosprirodnadzor), the Arctic Initiatives Center NGO and the Clean Seas International Environmental Foundation signed an agreement to carry out air count tests of polar bears and marine mammals as well as to evaluate the overall environmental situation in the Russian Arctic. The work will result in a comprehensive plan to count polar bears in the Russian Federation in 2021-2024 as part of the Ecology national project.

"We would like to see the real picture and the current state of the population, the numbers and the natural conditions of the polar bear's habitat. At the same time, we'll count other things like toxic waste sites, landfills, and garbage dumps. We'll also record updates on the ice situation. We have to see how effective this work is. When scientists provide the necessary information, our agency will be able to develop a system of state support measures," said Rosprirodnadzor Head Svetlana Radionova, who initiated this project.

Ready to take off

Air count tests are to be carried from an LA-8 amphibious aircraft designed for use in any latitude or climatic zone. The flight captain will be experienced test pilot, cosmonaut, Hero of Russia Valery Tokarev. The plane is to cover over 10,000 square kilometers in total. It will take off on August 1, 2020 in Amderma (Nenets Autonomous Area) and fly along eight routes to the northwest and northeast over the Kara Sea, and the Yamal and Taimyr peninsulas, plus the gulfs of Ob and Gyda.

"The planes were modified with thermal cameras; clear blisters and special photo and video cameras were installed to film from low altitudes. You should always take the Arctic seriously, because the weather can be different; it changes often. For me, it is very interesting, both personally and professionally. We will do something useful for the country and for the next generation. If we can interest young people in the Arctic and get them dreaming of traveling there to see it for themselves, everyone will gain from this," said Valery Tokarev.

"It is true that no one has counted polar bears for a long time. There have been no comprehensive counts. We are carrying out a test count, but I hope we will manage to accomplish it. This involves a lot of work from officials, pilots, scientists, engineers, designers, and operators. As Viktor Konetsky once said: ‘It doesn't matter how you travel — rail or sail — it's a lot of work, responsibility and stamina of those who go forward," said Vasily Bogoslovsky, General Director of the Clean Seas International Environmental Foundation, honored worker of the naval and river fleet, and honored polar explorer.

The project was named Master of the Arctic: this is what polar bears are often called. Scientists want to estimate the numbers and distribution of the polar bears, their state during the summer and fall, the age and gender structure of the population in the area they study and the parameters of their habitat, as well as evaluate the level of anthropogenic pollution and the role of natural and anthropogenic factors in the dynamics of the polar bear population.

"In fact, the project was launched 10 years ago on Franz Josef Land, when the cleaning of the Arctic started. Without science, it is impossible to take any measures or see why certain processes take place in nature or what we can do to use negative processes for positive purposes. We had been thinking about establishing a system to monitor polar bears across the entire Arctic for a long time and started developing it. First, we studied space shots and tried looking for bears on the white ice. My colleagues managed to do this. We could have used this as a counting method. However, surface methods on land, ice and snow are also necessary, as well as flights in small planes and, I hope, with UAVs in the future, because you can't fly very far in small planes in the Arctic. We also have preliminary experience in counting from a private plane, but, of course, this is not enough," said academician Vyacheslav Rozhnov, director of the Severtsov Institute of Ecology and Evolution.

Rozhnov added that similar polar bear counts have been carried out in Alaska and Chukotka, and the first instrumental results that showed the real number of polar bears and seals (feeding base) in the region were recorded. According to Rozhnov, these data were extremely important because they can help forecast the future: knowing the size of the food base and the population's age structure will make it possible to predict whether the population will grow or decline.

"At this stage, we do not plan direct contact with the bears, although this will also be part of our work: we tag the bears with special collars to monitor their movement, collect biological samples to see the processes within the population, to monitor their health and how stressed they are. This work is aimed at improving counting methods. In fact, this is very difficult. I hope we will receive interesting and important data that will serve as the initial step in creating and developing efficient tools for counting," Vyacheslav Rozhnov noted.

Rozhnov also noted how important it was that businesses and the state support such research.

Who will support this?

General Director of the Arctic Initiatives Center Andrei Patrushev said that it was easier now to involve businesses in addressing environmental tasks in the Arctic because a lot has been done to create favorable economic conditions in the region.

"The state adopted a strategy to preserve the polar bear population. In order to implement it, the collective efforts of the government, business, and public organizations are necessary. The Master of the Arctic project is a good step to begin this work," Patrushev noted.

He also stressed that environmental responsibility must be taken into account when implementing economic projects: you can't harm the environment when you work there, only improve it.

"The Arctic ecosystem is very sensitive to any impact from the outside, and due to its natural and geographical peculiarities any environmental problems will probably be transformed from a regional to a global issue. In this sense, the management of organizations that carry out or plan to carry out economic activities in the Arctic must understand that there are lots of possibilities for business, but it is unacceptable to use these opportunities without caring about preserving the unique Arctic flora and fauna. Yes, companies' expenses on environmental projects in the Arctic can be significant, but in the long run they will create a favorable social environment and therefore a sustainable profit," Andrei Patrushev added.

Svetlana Radionova noted that Rosprirodnadzor could serve as a bridge between scientists and businesses in this issue.

"We need to remind ourselves, and the state and businesses, how to behave in the Arctic to prevent the polar bear's habitat from being damaged. And, most importantly, we have to understand whether it's time to ring the alarm or we can still continue with support measures. This project was very easy for us: we quickly met with understanding from scientists, and we received public's support; then businesses were found that know why they're going to the Arctic, how they'll live there and for how long. These are not temporary business activities; they will explore the region kilometer by kilometer while preserving its fragile ecosystem. I am calling on these businesses to continue this program and make it an annual process," she said.

Radionova also emphasized that the large, beautiful, and fragile Arctic is part of our common home. "We are just returning home to see what's going on there. At the same time, we can't forget that we are visiting the polar bear's home and we must adjust to its life, not the other way round. Let's respect the predator and try to save it from harm. I hope that this is just the first step and that we will make quick progress, like an escalator: we will get a clear picture of what we are and how our home looks and will be able to adopt adequate supervision measures and a policy to help this gracious and strong animal to live safely in its habitat and fully own it."